Flicker Alley is pleased to welcome our first guest blog post from Doug Hanvey, a writer and casual moviegoer.

For filmgoers who dig horror, sci-fi, cult, animated, or just plain weird films, watching Flicker Alley’s new WILD AND WEIRD set is de rigueur. Yeah, that’s French, but so are three of the set’s films. In fact, the weirdest films on the set are the French ones, which I think says quite a bit about French cinema. Oh wait, I like French cinema!

WILD AND WEIRD boasts 14 films – 13 of them from the silent era – directed by luminaries such as Buster Keaton and D.W. Griffith. For you non-cinephiles (of which I am one), D.W. Griffith is no relation to Andy Griffith, though once you see his pic in the WILD AND WEIRD booklet, you can imagine him as an old fart on the streets of Mayberry.

So where was I going? Oh yeah, cellphones. Cellphones! You know, every time you’re in a theater nowadays you’re admonished to turn off your phone…like it or not. (It does piss some people off.)

They didn’t have that particular problem in 1909. They had an even bigger problem (literally): ladies’ hats! Imagine you’re chilling in your seat with your Milk Duds, and this broad (that’s also French) takes the seat right in front of you. 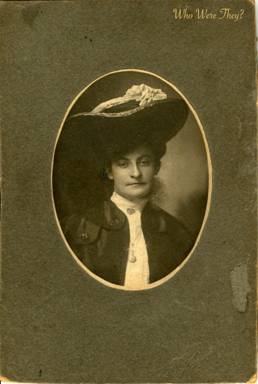 Or, even worse, this:

Now that’s a hat; a hat with the power to obliterate the movie-going experience of an entire row.

That’s what audiences were up against in 1909. Fortunately, show houses soon learned to project an informational slide (much like our cell phone admonishments) before the film: “Ladies, please remove your hats.”

In fact, the ladies’ hat dilemma was the inspiration for D.W. Griffith’s shortest film. In the comic Those Awful Hats (1909), which leads off the WILD AND WEIRD collection, women with enormous hats take the remaining seats in a packed theater. But not to fear! From the heavens swoops a massive “hat scooper” that is more than a match for the hats. In fact, it not only removes the hats, it removes a lady too. The lesson here? Remove your hat – or else.

As Those Awful Hats reveals, filmmakers of this era were already pushing the bounds of this new and astonishing medium. Not only does Griffith use early trick photography to superimpose the “hat scooper,” he creates a “film within a film” which is achieved by somehow inserting a moving image into the area formed by the movie screen (which the very informative DVD booklet tells me was accomplished via an early form of “matte printing”). I found myself amazed at Griffith’s ingenuity – hadn’t they just invented the “moving picture” a few years earlier?

If you rarely watch films from the silent era, perhaps you owe it to yourself to broaden your horizons. In fact, WILD AND WEIRD may be the perfect initiation for you. And remember, if you watch with others, please remove your hat.

Stay tuned to the Flicker Alley blog for more guest posts, interviews, news, highlights from our collection, and new releases.