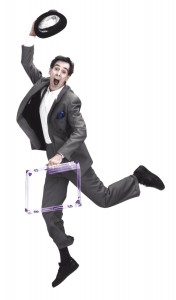 In honor of the 100th anniversary of Charlie Chaplin’s ‘Little Tramp,’ Flicker Alley sat down with Chaplin expert Dan Kamin, the man who taught Robert Downey, Jr. how to promenade and pratfall in the Oscar-nominated film Chaplin (1992). In Part 1 of our two-part interview, Kamin touches on the Tramp’s music hall roots and shares his advice for perfecting your Chaplin impersonation.

Chaplin’s ‘Little Tramp’ character is arguably the most influential comedic persona in film history. What about this character, in your opinion, makes it so timeless?

I’ll answer that from personal experience.  I was in college when I saw my first Chaplin film, The Gold Rush, and it absolutely bowled me over.  I thought it was the funniest film I’d ever seen, and the most moving.  I loved the way Charlie shyly courted the dance hall girl, and how he made the bread rolls dance on the tabletop for her.  I was amazed by the way he could turn into a giant chicken, or a man frozen stiff in the snow.  I admired how he maintained his dignity under the most humiliating circumstances, and his comical and wildly inventive problem-solving strategies.  I liked the way he held himself, and the way he moved.  I wanted to be as cool as he was.

I found myself standing up straighter and walking with a new spring in my step.  They don’t make bamboo canes like the one Charlie sported anymore, but I began carrying my umbrella at the slightest sign of rain, and it seemed to take on an interesting new life of its own.  I twirled it as I strolled and tapped it rhythmically on the pavement.  Like his original audiences, I found his gestures and attitudes irresistible.

In all his films The Tramp lives in a hostile world that threatens and excludes him.  He demonstrates, again and again, that we can do more than just survive that world.  If we’re imaginative and nimble enough, we can find delight, magical surprises, and even love there.

What do forks and bread rolls have to do with courtship?

Everything, it turns out.

It’s well known that Chaplin’s father, Charles Sr., suffered from severe alcoholism. Chaplin then used the idea of a drunkard to broad comedic effect with ‘the Tramp.’ Do you believe this to be an intentional correlation? And if so, how do you think it shows up in his performance?

Although Chaplin’s father was a popular music hall singer who drank himself to death, it’s unlikely that Chaplin thought of his portrayals of drunkenness in relation to his dad until he made Limelight, his last American film, in 1952.  In that film he plays an alcoholic music hall comedian attempting a comeback.

But playing the drunk, as opposed to being a drunk, was a staple of music hall comedy, and Chaplin received thorough training in the craft when he joined the Karno comedy troupe at the age of 18.  In 1910, at the age of 21, he was selected to lead a Karno company tour of America.  The tour stretched into four years, during which the company rotated three Karno sketches, the most popular of which was A Night in an English Music Hall.  In these sketches Chaplin played not the Tramp character he would develop in his films, but a wealthy drunk named Archibald Binks.

When he started making films his ability to play a convincing drunk led to some of his most inspired gags, and gave him a chance to showcase his formidable physical skills, including some hair-raising acrobatic comedy in which he tumbles down flights of steps.  In his films he almost always reverted to his upper class character when he plays the drunk, most notably in A Night in the Show (1915), One A.M. (1916), The Cure (1917) and The Idle Class (1921).  He occasionally played drunk scenes as the Tramp as well, mostly in the Keystone films he made in 1914.  One of the best occurs in Mabel’s Married Life, when he mistakes a boxing dummy for a bully who had earlier terrorized him in a bar.  For a full four minutes he tries every way he can think of to cajole, reason with, and subdue the brute, but ultimately the dummy defeats him.  The brilliance of the scene is the way Chaplin makes the inanimate object come to life for us as well as Charlie.  It’s a bravura performance comparable to the best of his later work.

What’s the first piece of advice you would give someone who’s hoping to impersonate Chaplin?

When I do presentations on Chaplin I sometimes teach the audience to act drunk the way Chaplin does.  That’s a good starting point for appreciating the incredible subtlety and fluidity of his movement.  Even when he’s not playing drunk, there’s a wonderful relaxed quality to his movement that makes it a pleasure to watch.  The only other performer I know of that approaches Chaplin’s appealing sense of physicality is Fred Astaire.

Chaplin is of course a genius of physical comedy, but his facial expressions are equally, if not more, important. What about them is so unique?

Stan Laurel, who was Chaplin’s understudy on the Karno American tours, felt that a lot of the power of Chaplin’s performances came from his eyes:

He had those eyes that absolutely forced you to look at them.  He had the damnedest way of looking at an audience.  He had the dam­nedest way of looking at you, onstage…They’re very dark, the deepest kind of blue, and intense, just like him.  And they can dominate anyone they look at.  That’s a part of the secret of his great suc­cess—eyes that make you believe in him whatever he does.

Laurel must have been right, because it’s something of a miracle that anyone ever bought into Chapin’s character at all.  He turns almost everything he does—walking, turning a corner, tipping his hat—into signature comic gestures that he executes with clownish exaggeration and machine-like precision.  Yet audiences immediately embraced the character as if he were a member of the family, albeit a very funny one.

Some of Chaplin’s most effective moments come when he’s not being funny, when he suddenly drops the comic mask and becomes naturalistic.  In one of the later Keystones, His Trysting Places, he smooches wife Mabel Normand with such spontaneous affection that it seems to catch her off guard.  Similar moments of startling intimacy percolate through his films, such as the moment that he is smitten with Edna Purviance in the mission in Easy Street, or the way that his face falls when he realizes that her mother has died in The Immigrant.  Chaplin became a master at infusing his comedies with such serious moments.  Tellingly, in City Lights his makeup is heavy and clown-like during the broad comedy scenes with the drunken millionaire, and toned down and naturalistic for the gentler humor in his scenes with the blind girl.

Of course, no discussion of Chaplin’s facial expressions would be complete without mentioning that he had one of the greatest smiles in movie history.  It lights up the screen, and he often aims it right at the camera, breaking the most basic rule of acting by acknowledging that there’s an audience out there watching him.  It’s a great gag, and it’s also one of the ways he achieves intimate rapport with movie audiences.

Tell us a little about Chaplin’s music hall roots. How did they inform the ‘Little Tramp’ character?

As I can verify from my own experience, there’s no substitute for working in front of a live audience to hone your performing skills.  Chaplin’s stage training had a profound effect on his film performances.  He was a working professional from the age of nine, learning to dance in a clog-dancing troupe, acting in legitimate drama, and mastering the skills of a knockabout comedian with Fred Karno and others.  Karno, who at his height had up to thirty companies on the road, operated a “fun factory” that cranked out scores of physical comedians who mastered a large repertoire of comedy sketches.  As Chaplin said,

It took about a year for an actor to get the repertoire of a dozen shows down pat.  Karno required us to know a number of parts so that the players could be in­terchanged.  When one left the company it was like taking a screw or a pin out of a very delicate piece of machinery.

Simply reading that passage, of course, evokes memories of countless scenes from Chaplin’s movies that delight us with the machine-like precision of their execution.

In addition to the other skills he mastered, Chaplin was by all accounts a prodigious mimic from the start of his career.  He was able to become any person or performer he encountered, and to the end of his life he convulsed people with his spot-on imitations.  Chaplin biographer David Robinson reveals that for one of the music hall songs in Limelight Chaplin perfectly channels music hall star George Bastow.

One of the intriguing things about watching Chaplin’s early Keystone films is that we can see the repertoire of eccentric gestures, expressions, gags, and stunts that he brought from the stage, and then watch him refine them once he’s able to see how they come off onscreen.  Many throwaway moments in the Keystones would reappear later, to much better effect, as Chaplin mastered his filmic craft.

Dan Kamin trained Robert Downey, Jr. for his Oscar-nominated performance in Chaplin and choreographed the film’s principal comedy sequences.  He also created the physical comedy sequences for Benny and Joon with Johnny Depp. The author of two books on Chaplin, he is a well-known comedian and mime in his own right, performing worldwide in theatres and with symphony orchestras. See Dan in action at www.dankamin.com.

Check the Flicker Alley blog, The Archives, next week for Part 2 of our interview with Dan! In the meantime, you watch the debut of the ‘Little Tramp’ in Kid Auto Races at Venice, part of our CHAPLIN AT KEYSTONE 4-Disc DVD collection.