One of the earliest French film fan magazines, Mon Ciné updated eager cinema enthusiasts weekly with the latest news on upcoming releases and the leading men and women in them. The cover of the February 28, 1924 issue below features Hélène Darly, whose fame had been recently bolstered by the success of her role as Régine de Bettigny in THE HOUSE OF MYSTERY. The caption beneath her image notes the strength of her performance: 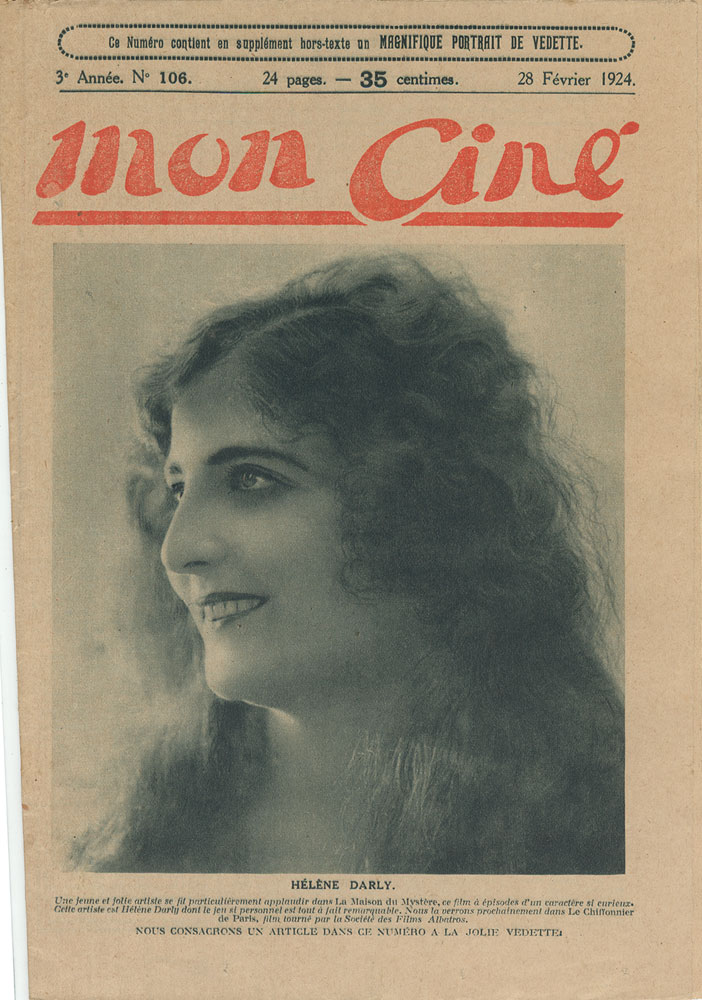 “A young and beautiful artist particularly applauded in THE HOUSE OF MYSTERY, that serial film of a very curious character. This artist is Hélène Darly, whose performance is so personal it is quite remarkable. We will see her in the near future in La Chiffonier de Paris, a film made by the Société des Films Albatros.” 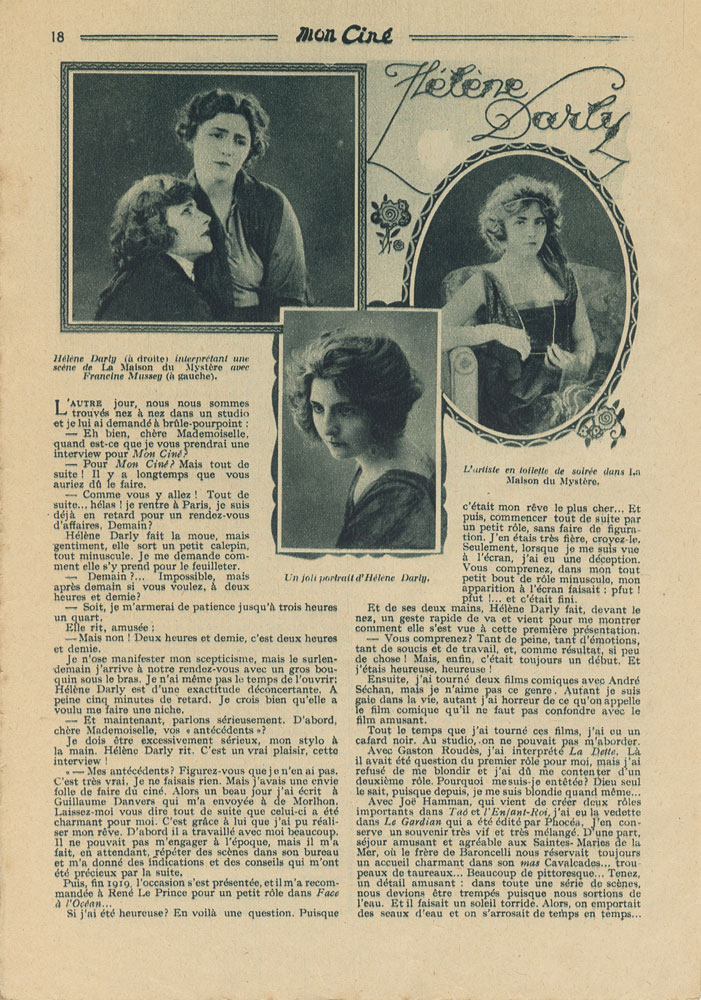 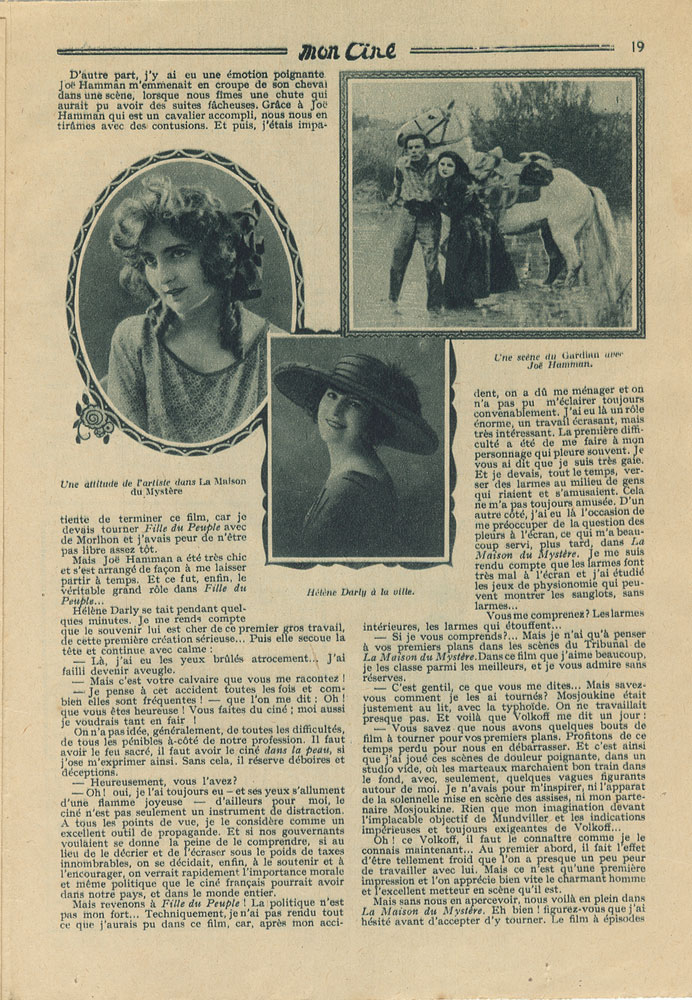 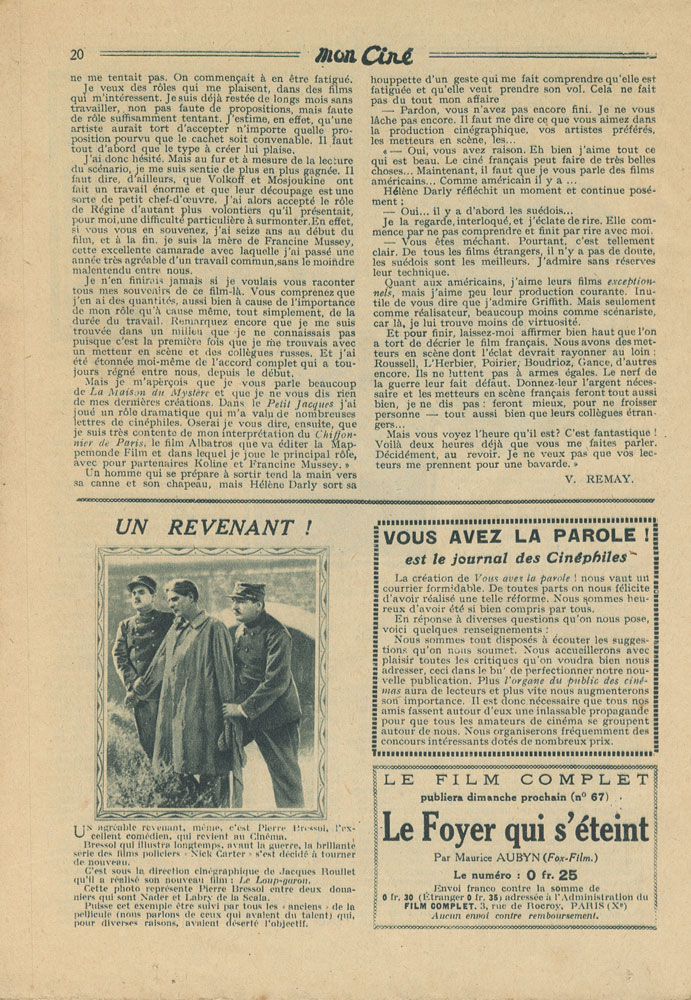 Inside, journalist V. Remay relays an impromptu interview with a gracious Darly. The full text is in French above. In the excerpt we’ve translated below, Darly describes how Fille du peuple helped prepare her for her later role in THE HOUSE OF MYSTERY and describes the extremely unorthodox manner in which some of her most emotional scenes from the serial were shot.

“Hélène Darly: On the other hand, I had the opportunity there [shooting Fille du peuple] to worry about the issue of crying on screen, which served me well later in THE HOUSE OF MYSTERY. I realized that tears look very bad on screen and I studied the facial expressions that can show sobs without tears…

Do you understand me? The internal tears, the tears that choke…

V. Remay: Do I understand you?…But I can only think about your lead scenes in the Tribunal scenes in THE HOUSE OF MYSTERY. In this film that I love, I rank them among the best, and I admire you without reservation.

Hélène Darly: It’s kind, what you’re saying to me…But do you know how I shot them? Mosjoukine was just in bed, with typhoid fever. We hardly worked. And then [director Alexandre] Volkoff said to me one day:

You know that we have some film to shoot for your lead scenes. Let’s use this lost time to get them out of the way. And that’s how I played those scenes of poignant pain in an empty studio, where the hammers are pounding in the background, with, only, a few vague extras around me. I had nothing to inspire me, nor the solemn pageantry of the set, nor my partner Mosjoukine. Just my imagination before the relentless objective of [cinematographer Joseph-Louis] Mundviller and the imperious and always demanding instructions of Volkoff…”

You can see Hélène Darly channel her “internal tears” in THE HOUSE OF MYSTERY, on home video for the first time in a 3-disc DVD collection and available for pre-order today.

For more essays like this one, plus film preservation news and special discounts, sign up for the Flicker Alley Newsletter.